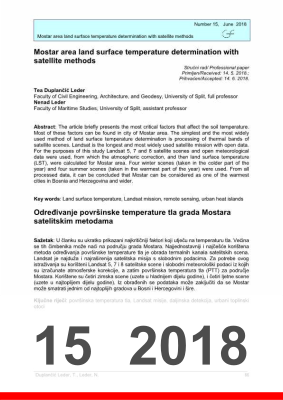 Abstract: The article briefly presents the most critical factors that affect the soil temperature. Most of these factors can be found in city of Mostar area. The simplest and the most widely used method of land surface temperature determination is processing of thermal bands of satellite scenes. Landsat is the longest and most widely used satellite mission with open data. For the purposes of this study Landsat 5, 7 and 8 satellite scenes and open meteorological data were used, from which the atmospheric correction, and then land surface temperature (LST), were calculated for Mostar area. Four winter scenes (taken in the colder part of the year) and four summer scenes (taken in the warmest part of the year) were used. From all processed data, it can be concluded that Mostar can be considered as one of the warmest cities in Bosnia and Herzegovina and wider.