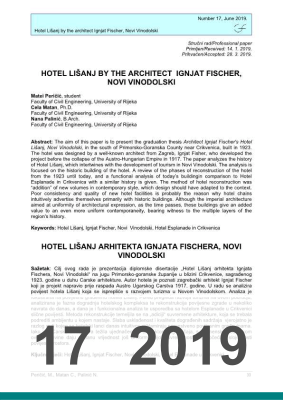 Abstract: The aim of this paper is to present the graduation thesis Architect Ignjat Fischer's Hotel Lišanj, Novi Vinodolski, in the south of Primorsko-Goranska County near Crikvenica, built in 1923. The hotel was designed by a well-known architect from Zagreb, Ignjat Fisher, who developed the project before the collapse of the Austro-Hungarian Empire in 1917. The paper analyzes the history of Hotel Lišanj, which intertwines with the development of tourism in Novi Vinodolski. The analysis is focused on the historic building of the hotel. A review of the phases of reconstruction of the hotel from the 1923 until today, and a functional analysis of today’s buildingin comparison to Hotel Esplanade in Crikvenica with a similar history is given. The method of hotel reconstruction was “addition” of new volumes in contemporary style, which design should have adapted to the context. Poor consistency and quality of new hotel facilities is probably the reason why hotel chains intuitively advertise themselves primarily with historic buildings. Although the imperial architecture aimed at uniformity of architectural expression, as the time passes, these buildings give an added value to an even more uniform contemporaneity, bearing witness to the multiple layers of the region's history.