RECONSTRUCTION OF HOTEL PRESIDENT IN DUBROVNIK IN 2013 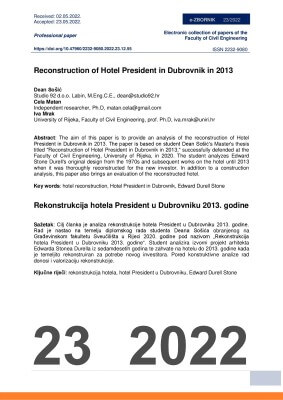 Abstract: The aim of this paper is to provide an analysis of the reconstruction of Hotel President in Dubrovnik in 2013. The paper is based on student Dean Sošić's Master's thesis titled "Reconstruction of Hotel President in Dubrovnik in 2013," successfully defended at the Faculty of Civil Engineering, University of Rijeka, in 2020. The student analyzes Edward Stone Durell's original design from the 1970s and subsequent works on the hotel until 2013 when it was thoroughly reconstructed for the new investor. In addition to a construction analysis, this paper also brings an evaluation of the reconstructed hotel.