THE AUSTRO-HUNGARIAN HANGARS IN MOSTAR - PART I 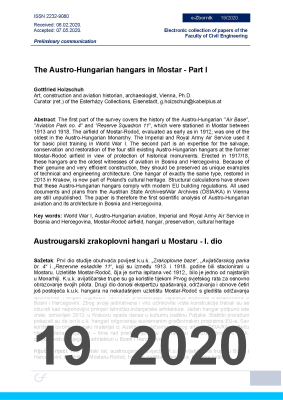 Abstract: The first part of the survey covers the history of the Austro-Hungarian "Air Base", "Aviation Park no. 4" and "Reserve Squadron 11", which were stationed in Mostar between 1913 and 1918. The airfield of Mostar-Rodoč, evaluated as early as in 1912, was one of the oldest in the Austro-Hungarian Monarchy. The Imperial and Royal Army Air Service used it for basic pilot training in World War I. The second part is an expertise for the salvage, conservation and restoration of the four still existing Austro-Hungarian hangars at the former Mostar-Rodoč airfield in view of protection of historical monuments. Erected in 1917/18, these hangars are the oldest witnesses of aviation in Bosnia and Hercegovina. Because of their genuine and very efficient construction, they should be preserved as unique examples of technical and engineering architecture. One hangar of exactly the same type, restored in 2013 in Krakow, is now part of Poland's cultural heritage. Structural calculations have shown that these Austro-Hungarian hangars comply with modern EU building regulations. All used documents and plans from the Austrian State Archives/War Archives (ÖStA/KA) in Vienna are still unpublished. The paper is therefore the first scientific analysis of Austro-Hungarian aviation and its architecture in Bosnia and Hercegovina.