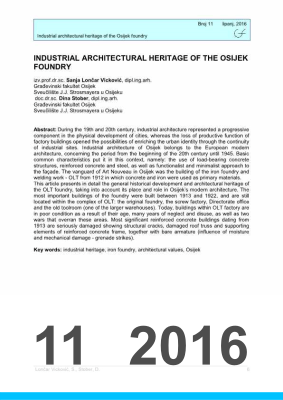 Abstract: During the 19th and 20th century, industrial architecture represented a progressive component in the physical development of cities, whereas the loss of productive function of factory buildings opened the possibilities of enriching the urban identity through the continuity of industrial sites. Industrial architecture of Osijek belongs to the European modern architecture, concerning the period from the beginning of the 20th century until 1945. Basic common characteristics put it in this context, namely: the use of load-bearing concrete structures, reinforced concrete and steel, as well as functionalist and minimalist approach to the façade. The vanguard of Art Nouveau in Osijek was the building of the iron foundry and welding work - OLT from 1912 in which concrete and iron were used as primary materials.
This article presents in detail the general historical development and architectural heritage of the OLT foundry, taking into account its place and role in Osijek's modern architecture. The most important buildings of the foundry were built between 1913 and 1922, and are still located within the complex of OLT: the original foundry, the screw factory, Directorate office and the old toolroom (one of the larger warehouses). Today, buildings within OLT factory are in poor condition as a result of their age, many years of neglect and disuse, as well as two wars that overran these areas. Most significant reinforced concrete buildings dating from 1913 are seriously damaged showing structural cracks, damaged roof truss and supporting elements of reinforced concrete frame, together with bare armature (influence of moisture and mechanical damage - grenade strikes).